I was most fortunate to be invited by Dr. Helen Hwang to co-facilitate this pilgrimage to the sacred land of Old Korea and to uncover the Great Goddess of East Asia – Mago, a Primordial Mother. 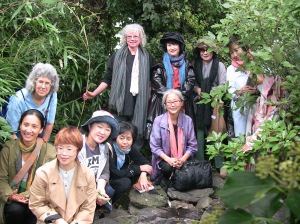 “Mago” is both a common noun meaning “the great goddess” and a specific goddess who is the progenitor, nature-shaper, and ultimate sovereign known to East Asians especially Koreans since the time immemorial.[1]

Helen did the hard work of arrangements: I truly entered into the magical process as a neophyte and guest in terms of the place, the people, and the language. What I brought to it was my research of Gaia, Primordial Mother of Western tradition, and my Goddess devotional practice over decades.

The Mago Pilgrimage 2014 was a deeply transformational experience – its purpose of a deeper knowing of Mago, Primordial Goddess, achieved in more ways than can be spoken or known: seeds were sown, windows and doors opened, new connections of heart and mind made. It was a journey into relationship with Her in this Place: visiting ancient shrines, seeing and travelling Her land, walking up mountains, meeting the beauty in people who seek Her too. Mago is no longer just a name for me: in this journey I entered into love with Her land and Her people. Though Korean culture suffers as much from patriarchal and consumer priorities as most other global localities, Mago is threaded into Korean culture: She is still alive there and being drawn forth by artists, activists, everyday seekers, scholars and those who yet remember their indigenous heritage.

The core participants were Helen Hwang, myself, Rosemary Mattingley – editor-in-chief of Return to Mago blog, and my partner Taffy Seaborne. We were joined by another fairly consistent group at most locations, then by several or more participants at particular places. For me, this extraordinary journey was not without challenges, but that is the nature of a pilgrimage … to take one into new deep territory: I was challenged on every level … physical fitness, language, food, my role as guest faciltitator leading ritual in unfamiliar context in a different hemisphere, with words that had to be translated. Yet always there was gracious reciprocity, and I felt a deep sense of awe of what I was participating in.

On the first day we visited Magoist sites of Old Josean period in Ganghwa Island in the very North of South Korea – starting with entry across the new bridge to Gyodong Peace Island, which included going through a military checkpoint – a reminder of where we were and what has happened to this sacred place. We met up with a group of mostly locals and after a simple circle ritual of acknowledging sacred space, we walked towards the peak, the ruin of Gwanmi Stronghold. We came across an ancient “sweat lodge” – Hanjeung-mak, as they are named – shaped like a womb[2]: some of us entered it and talked women’s business. 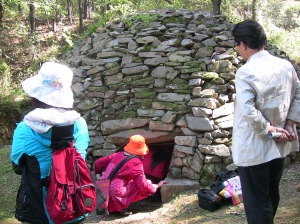 The group continued up to the Rock of Constellation Marks.[3] That afternoon we gathered with women in Jaram Library, and heard them speak of their spiritual search for themselves and their sense of Mago, the Great Goddess: one had travelled six hours on public transport to be with us. It was the kind of meeting that many reading this may be familiar with, albeit in different cultural contexts – so good and so needed for recovery of ourselves. Helen Hwang and I both gave short presentations – Helen on Mago, and I on something of my Goddess journey and PaGaian practice at MoonCourt in Australia. That evening on a jetty we had a playful circle and danced the Ganggangsullae, a traditional women’s sacred dance, as the full Moon eclipsed.

Many of these women joined us next morning at Jeondeung Buddhist Temple where we would walk to the Peak of Three Maidens (Samrang-seong):[4] and in our ceremonial circle in the carpark women expressed the significance of the pilgrimage for them … it was heart-warming. Since I was unable to do the steep walk to the Peak, a young woman, Suyeon Yu, stayed with me: we shared stories of religious experience – her own being Catholic and Buddhist, and how she was just beginning to discover what we may term as Goddess – Magoism in her indigenous Korean roots. We visited one of the shrines housing four large beautiful Goddess statues: BoRyun Bosal who held a lotus (for caregivers), Munsu Bosal who held a pen (for wisdom), KwanEum Bosal who held a vessel (for pouring forth blessing), and JiJang Bosal who held a wheel (for the passing away): later joining the returning pilgrims for an opening circle under an old tree.

Our core group journeyed on to Seoul National University where next day some of these women joined us again, with others, including some men, participating in a welcoming Goddess Symposium entitled “Archaic Future History Making: Reunion in the Great Goddess, Mago and Gaia”. Lydia Ruyle’s Goddess banners draped the walls of the lecture theatre, which we entered ceremoniously with the music MaGaia Womb by Hae Kyoung Ahn: I called the directions and elements (with careful thought about which hemisphere I was in) and there was traditional shamanic ceremony by Mudang Yi Jee-Nyo who later gifted me with a brooch “of both Moon and Sun at the same time”. Helen and I presented papers and took questions and comments from the group – there was lively discussion. My presentation was translated by a graduate of the California Institute of Integral Studies, Inhui Lee, who had returned to Korea to take care of her mother.

We flew from Seoul to Jeju Island in the South the next day: allowing an overview of the alluring Land Herself. We beheld so much beauty in the course of the pilgrimage – both in the land and the people, that our camera/video kept running out of charge before each day was through. Our destination on Jeju Island was Gangjeong Village known for peace activism and resistance to the US naval base being built there: one of the peace activists, Miryang, was our host for a few days, during which we spent time at several ancient remarkable shrines.

Entering a shrine on Jeju Island

We attended a traditional shamanic ritual opening (a Gut) of the MoonLight Bookstore, and visited the Museum of Sea Diver Women – the Haenyeo. We visited the Gangjeong Peace Centre and participated in the protest/presence of the peace activists, who sing and dance daily at the site of the naval base construction: we held a small prayer circle in view of the barbed wire and concrete, out on the jetty. Our last evening on Jeju Island was spent in the north at the community of Tasitelle Residence: we were treated to an astonishing performance (on the hillside at sunset) by a Japanese Dance troupe.

Taking the ferry from Jeju Island back to the mainland, we travelled to Seonam-sa Buddhist Temple, having tea and meeting next day with the head monk: we took a pleasant walk with him, eating wild chestnuts and persimmons, but he was not forthcoming about which shrines within his temple might be of particular interest to our pilgrimage … indeed he was in the process of “purifying” his Buddhism of these indigenous strains. Helen took her own tour of the site and serendipitously met a nun who told her the stories she was hoping to hear, and showed her the place of the Hearth Fire Goddess, Jowang Halmi.

Then a long drive, stopping at the tea shop of eco-feminist, singer-songwriter Hae Kyoung Ahn who had baked bread especially for us. We did some sightseeing, and at last arrived at Mago Castle,[5] Mt. Jiri!

After a gracious meeting with Mister Kim, teacher of a tradition combining native Korean religion and Confucianism, who explained his cosmology in some depth, speaking of restoring original heart and mind, that the time of integration – Haein – is coming, the group of us proceeded to the sacred walk up Mt. Jiri to the Peak of Three Deities – Samsin-bong. Our guide was Maru, who had lived in a cave on the holy Mountain for thirty years: for him the steep walk was a stroll. I made it over halfway up, and waited there. It was a glorious arrival for those who made it, though I was not disappointed with my placement.

Next morning we attended the Mago International Conference – “Celebrating the Revival of Magoism in Mago Castle, Mt. Jiri, with the World”, marking the official recognition of this Mago site and the annual festival there to be of national significance: Helen and I presented papers, which were translated into Korean.[6] The program booklet had a triple spiral motif on it, which I assumed to represent my Western tradition, but found out it represented Magoism. Other papers were by feminist Dr. Ok-Soong Cha, one on a history of this sacred site (Samseong-gung), and another on sacred sites and tourism: most sat on the floor throughout. That evening at the restaurant of the village-style house in which we stayed, we sat at table with Master Hanpul who together with his partner Uju, and a dedicated community of students, has restored the three thousand year old site; his family has lived there for eight hundred years. After discussion of the next day’s auspicious event we returned to the outdoor site for traditional entertainment – a Gut of Meeting Triad Deity/Shadow Play … truly beautiful.

It is hard to adequately describe the stupendous all-day ceremony, attended by hundreds and national press – the Festival of the Return to Mago (Open Heaven and Great Gut): it involved six scenes at different locations on the slope of the Mountain … six Movements of a Magoist Live Drama, scripted and directed by Master Hanpul, based on the Budoji texts.[7]

In one scene, our core pilgrimage group was unexpectedly invited into ceremonial roles, and in the final scene Helen and I were called to ascend the steep stairs to the Shrine Hall of Three Sages to light the candles … this was a complete surprise, and I am scared of heights – but I could not refuse! Helen led the way holding my hand – like Isis leading Nefertiti. Soon after that Helen was called to chant a lengthy written script.

That night we enjoyed informal celebrations with the performers and celebrants: they insisted we perform for them and we all enjoyed singing and dancing, meeting each other in high spirits.

The pilgrimage was now complete: there were farewells and a long day’s drive to the airport near Seoul. I was looking forward to being home again, but my heart and mind had been engaged: I am moved as I remember. I am deeply thankful.

In the course of the pilgrimage I understood that what had happened to Mago and Magoism in East Asia is similar to what had happened in my own Western tradition to the Primordial Mother, yet with its particular cultural complexities.[8] What is common is that Her stories have become hidden, covered over by changing priorities, concerns with nation-states and heroics … She was replaced with images of gods and sages, the land storied as if He was “in the beginning”. But the change has begun, and this pilgrimage was very much part of Her invocation.

[3] Korea has more megalithic dolmens than any other country in the world. see: http://www.megaliths.net/korea.htm

[4] The stories told at the place only speak of patriarchal history – no mention of the Maidens.

[5] Usually translated as “castle”, but “stronghold” is a better sense of what is meant: it was not a fortress.

[6] By generous volunteer to the Mago work, Professor Ryu Hyunju.