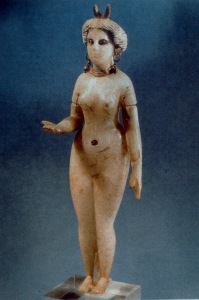 Ref: Hallie Iglehart Austen, The Heart of the Goddess, p. 131

“Almost every ancient culture’s creation myth begins with Her.[1]In the beginning was the Matrix, and the Matrix was all there was. “Before creation a presence existed …(which)… pervaded itself with unending motherhood.”[2] This Matrix was not “feminine”, in any stereotypical way, which would limit Her to a certain mode of being. She was beyond all pairs of opposites. As the beginning and end of all things, She contained it all – she was yin and yang, right and left, dark and light, linear and cyclic, immanent and transcendent. There was not an either/or. She was not carved up into bits, apportioned a certain fragment of being – She was a totality. She bore within herself all of the polarities….”

re-blogged from Return to Mago E-zine