This is an abbreviated version of the Cosmic Walk ceremony done regularly in MoonCourt, Blue Mountains, Australia. This Cosmic Walk will be presented at the Australian Earth Laws Alliance conference  November 23rd, 2017 in Brisbane, Australia.

Setting: a 30 meter rope spiral laid out with 35 candles placed at distances to the scale of 1m = 460 million years, marking some significant moments.

Reader: From THE GREAT MYSTERY, which is wholly beyond all language and understanding – that Well of Creativity, Ultimate Reality which brings all things into existence, sustains all things, is revealed in all and to whom all returns …

From this great Mystery, some 13.7 billion years ago, is born the Universe … time, space and energy. THE GREAT RADIANCE. THE BIG O. This includes what we refer to as quantum fluctuation, inflation, expansion, gravity, electromagnetism, strong and weak nuclear forces, particle-antiparticle annihilation, creating a cosmos of matter and photons. Hydrogen and helium form.

Reader: 2 billion years later 11.7 billion years ago: GALAXIES emerge. Gravity draws hydrogen into dense spheres of gas, sprinkled throughout each galaxy. At a threshold pressure, nuclear fusion begins – STARS are born, live, and die. Larger stars in their death throes explode and become supernovas blasting out into the cosmos. Supernovas are the mothers of the Universe, creating in their wombs the complex heavier elements that enrich the galaxies. Birth, death, and rebirth are ancient themes of the Universe.

Reader: 5 bya: birth of the SUN. Our Grandmother Star – Tiamat – huge in comparison to her child, our Mother Sun, becomes a supernova. In an explosion of possibilities She gives rise to our swirling solar system.

Reader: 4.6 bya – EARTH and the planets of our Solar system are born from aggregating debris in their orbital paths.

Reader: 4.5 bya: There is great bombardment – comets and meteorites pelt the Earth. The MOON is born when Earth is impacted by a Mars-sized body which also causes the Earth to tilt to the side giving rise to the seasons of the year.

Reader: 4.1 bya: the bombardment ends, Earth cools. Lightning storms rage. RAIN falls upon Earth for the first time – on and on. Great OCEANS form. Exuberant volcanoes expel hotly agitated deep earth to the surface. Over hundreds of millions of years, Earth has grown from dust particles to a large, hot, molten rock.

Reader: 3.8 bya: Bacteria emerge – possibly at great depth within Earth’s crust or at hydrothermal fissures in the floor of the deep oceans. The FIRST LIVING CELLS … the Mother cell – all our cells hold the memory of her. This Biosphere acts in association with geological and chemical activity to set up continuous cycles of Earth’s finite reserves of elements vital for life: GAIA’S CLOSED CYCLE METABOLISMS are now in place.

Reader: 2.15 bya: PHOTOSYNTHESIS! Small creatures, who had run out of hydrogen from volcanic gases, learn to capture the Sun and use the energy, breaking apart H2O to feed on the hydrogen. Biomass increases as a result. A pollution crisis ensues as oxygen is left free floating in the environment, a waste product for these early life forms.

Reader: 2.1 bya: OXYGEN CRISIS threatens all life, when geology can no longer soak it up. Primordial cells unable to adapt to the new conditions disintegrate from the excess heat. But is also an opportunity because (i) an ultraviolet-absorbing OZONE SHIELD is formed in the upper atmosphere and (ii) RESPIRATION evolves, as a way to use the oxygen for high energy.

Reader: 1.5 bya: crisis conditions such as food shortages, lack of moisture or extreme temperatures drive hungry ancestral organisms to resort to eating each other – HETEROTROPHY. Sometimes, these tiny cellular beings cannot digest what they have devoured and a type of sexual union arises – MEIOTIC SEX. The genetic possibilities for life increase enormously.

Reader: 560 million years ago: the first MULTICELLULAR organisms emerge – an innovation in which the offspring of dividing cells stay in bonded association with each other, resulting in the first communities and the birth of SYNERGY. It is a kind of self-organisation that allows many new kinds of cooperation and specialization for the good of the whole. There is more biodiversity. Organisms grow larger and more complex, and with less capacity for self-repair, resulting in DEATH BY AGING. Soon after there is also the FIRST MAJOR EXTINCTION (Cambrian) – was its cause glaciation, predation or combination?

Reader: 520 mya: SIGHT is invented, in various forms including sophisticated crystal lenses of calcite in the compound eyes of trilobite arthropods. Earth sees Herself for the first time.

The first soft-bodied animals evolve in the oceans. Over the next millions of years, animals invent hard parts for teeth, beaks and claws, and shells for protection.

Reader: 440 mya: Life ventures onto LAND. Algae and fungi symbiotically pool their talents, merging into the first LAND PLANTS. The continents grow green with low-lying ancestors of mosses. Leaving the water, animals such as worms and mollusks and crustaceans seek the adventure of weather and gravity. INSECTS evolve.

Reader: 400 mya: ANCESTRAL SPIDERS and the first AMPHIBIANS. Animals hop and lumber onto land, trading in their gill slits for air-breathing lungs, transforming fins into stubby legs and continuing to return to the water to lay their eggs. Small scale mountain building is going on with lava flows, heavy erosion and upheavals.

Reader: 360 mya: the invention of the wood cell – the first TREES, as plants rise to new heights. The first subtropical FORESTS evolve. Over generations, these forests load themselves with carbon extracted from the atmosphere which later becomes fossilized as coal and oil.

Reader: by 320 mya: Earth learns to fly, as insects evolve FLIGHT. Earth learns to HEAR, as ancestors of the modern frog evolve the first vertebrate ears – hearing the first sound waves transmitted through air. The first REPTILES appear, with the first land worthy eggs that can survive out of water – the AMNIOTIC EGG with a shell and membrane.

Reader: 250 mya: PANGAEA forms – – a single supercontinent – in a series of steps over millions of years. The THIRD MASS EXTINCTION (Permian) and perhaps the most devastating (75 – 95 % of all species eliminated) – marking the end of the Paleozoic Era … possibly due to land and ocean re-arrangements, and resultant climate changes, and/or possible asteroid impact.

Reader: 230 mya: emergence of DINOSAURS. For millions of years these creatures flourish. Dinosaurs, sometimes as large as 40 meters, are social animals that often travel and hunt in groups. Dinosaurs develop PARENTAL CARE, carefully bury their eggs and stay with the young after they hatch, nurturing them toward independence.

PANGAEA BREAKS UP into Laurasia and Gondwana. Earth will bring forth six times more biodiversity as the continents draw apart. The PACIFIC and then the ATLANTIC OCEANS form. The FOURTH MAJOR MASS EXTINCTION (Triassic).

Reader: by 200mya: the FIRST MAMMALS, small and nocturnal, jump, climb, swing, and swim through a world of giants. Some rodent-sized insect- eaters evolve lactation, mothers spend more time in the nest keeping their young both fed and warm.

Reader: 150 mya: BIRDS emerge, a direct descendant of the dinosaur as leg bones evolve into wing bones, jawbones into beaks and scales into feathers. Far larger than today’s birds, wing spans are as large as 12 metres.

Reader: by 114 mya: FLOWERS become an important part of the flora, evolving gorgeous and overt sexual organs, colors, perfumes, and delightful nectars. Insects are attracted and transport pollen from one flower to the next, fertilizing the plants on which they feed. MARSUPIAL MAMMALS – kangaroo and platypus have evolved. Now PLACENTAL MAMMALS too.

Reader: 65 mya : the Cenozoic Era begins, after the FIFTH MAJOR MASS EXTINCTION (Crustaceous), caused when a mountain size asteroid hits the Yucatan peninsula. This results in huge tidal waves, a magnitude 12 earthquake, acid rain, dust blocking light from the Sun, a firestorm that incinerates a quarter of the biomass releasing huge amounts of carbon dioxide that increases global temperature for a million years. Dinosaurs disappear, after 160 million years.

At the beginning of the Cenozoic Era – 65 mya – mammals embark on a fast evolution in the space created.

Reader: 5 mya: Chimpanzees and hominids. Within a million years the hominids leave the forest, stand up, and walk on two legs. The savannah offers the challenges and opportunities for these early ancestors. Australian SOILS are laid down – some of the oldest on Earth.

Reader: 2.5 mya: the FIRST HUMANS (homo habilis) are making tools and possibly what we may call “art” – early symbolic representation.

Reader: by 50,000 years ago: humans have entered AUSTRALIA. They and the dingo they bring with them, cause an extinction of the largest marsupials, reptiles and flightless birds- as was characteristic of almost all human migration. Human migration around the planet marks the beginning of the current SIXTH MAJOR MASS EXTINCTION.

Reader: by 11,000 years ago: there are musical instruments, cave paintings. TAMING of dogs and soon sheep and goats, then cattle. AGRICULTURE and the DOMESTICATION OF PLANTS all over the globe emerges

Reader: by 3,000 years ago: Cities have grown up. NEWGRANGE in Ireland has been built, the bluestones at STONEHENGE are in place. The Sumerian civilization has invented the WHEEL and CUNEIFORM WRITING. Soon the building of the Egyptian PYRAMIDS begins, and CLASSICAL RELIGIONS emerge – Judaism, Buddhism, Hinduism, Christianity, Islam. Rule of the Father emerges. There is CHRONIC WARFARE. Soon the earliest origins of the ALPHABET, and the Sanskrit language. Soon the time of Confucius, early Greek philosophers. Soon coinage as MONEY is invented.

Reader: by 450 years ago: the COPERNICAN revolution in Western consciousness, and the beginning of the mechanistic paradigm as primary metaphor for understanding the nature of Earth and the Cosmos.

Large scale Western COLONIZATION of other lands has begun. The ROMAN INQUSITION has been put in place – persecuting and murdering humans of Earth-based religious practice.

Reader: by 100 years ago: the THEORY OF RELATIVITY is introduced – quantum physics, nuclear weapons and nuclear medicine. Western science gathers evidence of a DEVELOPING and EXPANDING UNIVERSE – distant galaxies and deep space are coming into human awareness.

Reader: by 60 years ago: Rachel Carson’s Silent Spring begins new ecological awareness in the West, DNA has been identified, the first MICROCHIP developed, a CHARTER OF HUMAN RIGHTS is adopted, subjugated races and peoples voice dissent to achieve change. BACKGROUND RADIATION, echoes of the Origins/Birth of the Universe – are detected.

Reader: Today humans have seen EARTH AS A WHOLE from space, within the Womb of Space. Earth is again recognized as a living organism (not a machine or inert) – “GAIA”. There is growing recognition that humans – with a tremendously expanded population and huge demands on the body of Earth – are causing the SIXTH MAJOR MASS EXTINCTION. PERMACULTURE is developed. The World Wide Web (INTERNET) is created. Humans are understanding anew, the deep communion, relationship and subjective nature of all: realizing that we are IN the unfolding Story of the Cosmos, participating with our consciousness, exploring our role in this sacred awesome Event. 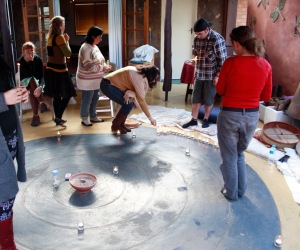 The ceremony was concluded with a breath meditation for receiving all of this. The meditation incorporates within it the three qualities of the Cosmogenesis outlined by Thomas Berry. It is based on the PaGaian Cosmology Triple Goddess Breath Meditation.