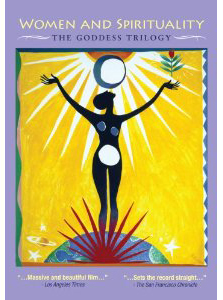 “… The designation of this material as “women’s spirituality” is grounded in the fact that it originates in female experience of regeneration of life, and probably in the fact that it is mainly women who have practiced it. I offer that although this may be so, the material is relevant to any and all beings concerned with the regeneration of life. The male, in the oldest of human cultural traditions, was usually included amongst such aspirants, and always had a role in the support and nurturance of the female regenerative capacities – and so may anyone. This role need not be a subordinate role as is sometimes thought, and does not succeed when it becomes a dominating possessive role, as it commonly has. It is best rather when supportive of this central task of all genders – indeed that of all species – regeneration … Creativity.

Women are half or more of the human race, and play a central part in the web of life: the fact that material such as this needs to be classified as “women’s spirituality” and often marginalised, is perhaps an indictment of current religious thinking on the planet. As the first film in the series – Goddess Remembered – points out, we have lived for the last 6000 years in a context that increasingly celebrated the “hero”/ conqueror more than it did the role of nurturer. This is obvious in the prevalence of “war” metaphor in everyday language, in the telling of history as a series of conquests, and in the fact that last century was the bloodiest one hundred years on record. Our times seem to require some focussed attention on what real power might be, and how it might be exercised and supported. Goddess Remembered offers a vision of a way of being – a way of relationship – with other and place, that honours the miracle of life and its organic power. It is based in very recent evidence – from just last century – of civilizations that existed for millennia without chronic war, and of social and religious paradigms wherein women’s roles were central and respected. Whilst many argue about aspects of this evidence, it is also apparent that current paradigms wherein female imagery is backgrounded and nature is seen as a resource to be exploited, are not ethical or functional….”

This is an excerpt from the full review by Glenys Livingstone: